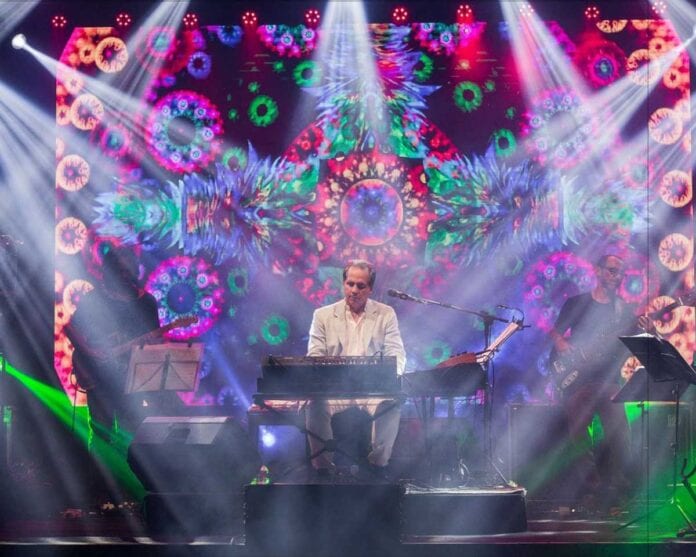 1. American fans know you as a Brazilian jazz pianist from the success of your ‘Sebastiana’ album. But your musical career started out quite differently. Could you tell us how you got started?

Well, I started very young, learning how to play at the age of 5. And I started working as a paid musician at 14.  From the beginning, I was performing popular music in Fortaleza with local artists and professional singers including a very successful singer named Amelinha, who was married to vocalist Zé Ramalho.

So, at that young age, I was already traveling with Amelinha throughout Brazil.

By then, I had already been invited to play at my school. I began working in the studio too, doing jingles, commercials, advertising and arrangements for records. I learned to play various styles: jazz, popular, erudite, and that gave me a good musical education. I played a little reggae, jazz, some classical and MPB. So, my beginning was very much as a studio musician. I started recording early, too.

2. What has been the most impactful moment in your musical career?

It was when I went to live in Rio de Janeiro in 1988. When I moved there, Rio was already the heart of Brazilian music. There was so much going on, because all the record companies and television networks were there, and all the multinationals had offices there. Nowadays, São Paulo has captured some of that energy but at that time, it was all Rio de Janerio.

So, I started meeting a lot of people, working professionally even more often. I even had a record label there, launching Brazilian music titles. Rio gave me opportunities to play and perform with so many talented musicians, and it’s a place where there are many styles, influences and international shows that you end up expanding your circle of friends a lot and working even more. So many early opportunities and growth came from my move to Rio.

3. What songs and musicians are you listening to these days?

I love to listen to young people and new talents. I also listen to the popular ones, but I like to discover what talented new musicians are doing, and there are several that I like and enjoy to.

I think we are living in a time of great creativity, due somewhat because musicians have the opportunity to record at home, improving their talents and their craft, self-producing better with home studios. The internet also gives musicians the possibility to take online classes and learn music theory .

When I was young, in the 70s, I had to repeatedly pick up the needle on our vinyl record player to learn a musical phrase. Today, we have videos to show us how. So today young musicians suffer less than we did back then, but the old ways had their upside, because we increased our ‘hands on’ capacity for perception.

4. How would you describe your lifestyle and what is a typical day in your life like?

Well, my lifestyle is an active one, and always busy. I really enjoy working so I do a lot of different things. I like to multitask, and my typical day revolves around many facets of my professional life.

I am a musician, an attorney, a husband and a father and the Honorary Consul for Belgium so my day spans several sectors. Because of this, my day-to-day schedule usually includes many meetings.

I like producing a lot. I’m finishing a book. I’m building a recording and production studio… Last year I produced six video clips and I also produced eight videos for Live In Rio (Ao Vivo No Rio).

I am building a new house, coping with COVID, working with copyright law and raising a family. Therefore in my life, my typical busy day includes a lot of demand. With my new studio, I intend to slow things down a little more and have more time to produce more records.

Someday, I intend to have a calmer life.

5. So, your professional life extends well beyond the role of ‘musician’. Tell us more about your other business interests.

My other interests? As an attorney, my practice revolves around copyright and authorial rights. As the Honorary Consul of Belgium, I believe that I can help many Belgians here in my region of the Brazilian northeast.

My position also brings a set of cultural exchange interests across that bridge between Brazil and Belgium. Belgium is home to the European Union in Brussels, with an important political role in Europe. Personally, representing this small country is a great happiness. Belgium is small in terms of size, but giant in terms of technological advances. It is known to be a kind and very socially responsible country.

Finally, I really like the controlled environment of the recording studio. I like the perfect sound and when settled in, it’s like being teleported to another dimension. The studio is a great laboratory. In this sonic environment we can create and invent, study and experiment.

I’m always in search of a more original sound. I work with instrumentals, so we get to create many musical combinations and textures. We work making fusions of styles, combining different instruments to create different sounds.

6. What is wrong with Brazilian music these days?

Unfortunately, we are living through a difficult period in Brazilian music. This is because we, as Brazilians, have at our essence, a tradition for high quality music. In history we see that Brazilian music is respected worldwide for its melodies, rhythms and poetic lyrics.

But, the phenomenon of mass communication has brought to the media an exaggerated relationship with overly-commercialized music, passing the limits. There was always commercial music, but quality music had more space. But currently, the media and streaming services are putting too much emphasis on entertainment music.

I make a conceptual distinction between music and entertainment music. Music needs to have a minimum quality. Entertainment music is something made to dance or to be a backdrop for another activity. There is music to listen to and music to flow in the background.

Unfortunately, quality Brazilian music has been largely forgotten and we have seen too many bad productions.

7. Everyone has a hobby. What is yours?

So, I am a travel photographer. I like to record my trips. I haven’t had the opportunity to organize a book or exhibition, but maybe one day. I have an apartment on the beach where all the images on the walls are framed pictures of mine. I think photography is very similar to recording music, because it is a captured moment that’s eternal and you can always refer to it.

8. Fortaleza is a beautiful, coastal city. If you were a tour guide for Connect Brazil visitors, what restaurants, clubs and landmarks would you take them too?

If I were a guide…  well, Fortaleza and the state of Ceará is a beautiful coastal area with excellent beaches, and there are many typical beach restaurants where you can eat simple but delicious food, especially fresh seafood, crab, oysters and shrimp.

But specifically, I would take my group to a pair of great restaurants.

The ZOI restaurant is a Greek restaurant with Mediterranean cuisine. It sits on the edge of a beautiful lake, and in front of that lake there is a water ski club to entertain. Another popular restaurant is Coco Bambu Frutos do Mar, and they make several different types of shrimp dishes and it is more in line for tourists.

We would visit the beaches of Canoa Quebrada and Jericoacoara as places to see, but there are also many charming hotels and cozier places where you can stay farther from civilization. Ceará also has a thriving beach tourism vibe where there are many possibilities.

9. Does music run in your family? Do you see your children following in your footsteps?

Music in my family is very much a part of everyday life. I have been married to my wife Manoela for 15 years and we have two daughters, Maria, 13 and Sara, 11. Of course, they saw me play as children and just like me, they both began to study music at a very young age.

The two play the piano. Maria plays the guitar, and Sara sings. They compose, write, and sometimes play with me. They’ve played percussion on one of my recordings and when I traveled to Japan, Sara sat at the piano to play with me… four hands. This year we all did a concert with Brazilian conductor Joao Carlos Martins, and the three of us played with six hands!

So, I have a deal with them: I do not oblige them to study music, but I do encourage them. I think compelling someone to study something isn’t the right approach, so I try to manage it more smoothly. Maria and Sara have piano lessons, but they also have a normal life. Of course, they enjoy the pop music of the moment, but they also enjoy quality music.

My wife was an actress and a dancer, and she’s also involved with plastic arts. She likes Brazilian music and because we’re on the same wavelength, she helps me a lot in my career, giving me a lot of support.

Music is elemental within our family; we are very connected through it. If any of my daughters want to pursue a career in music, it will be great. But I don’t want to oblige, because creating music is quite a mission. It’s not easy.

10. Of all the songs you really like, is there one you wish you had written?

Well, just one? There is a special song which I like a lot, called ‘Palhaço’, by Egberto Gismonti. It is a simple song, with a superb delicacy, smoothness and inspiration. I really like this composer – a great one – a Brazilian composer who calls upon various influences, from classical music, jazz and Brazilian, so ‘Palhaço’ is a song that I have a special affection for. 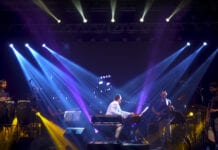 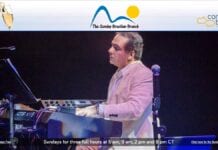 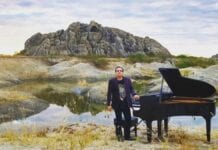