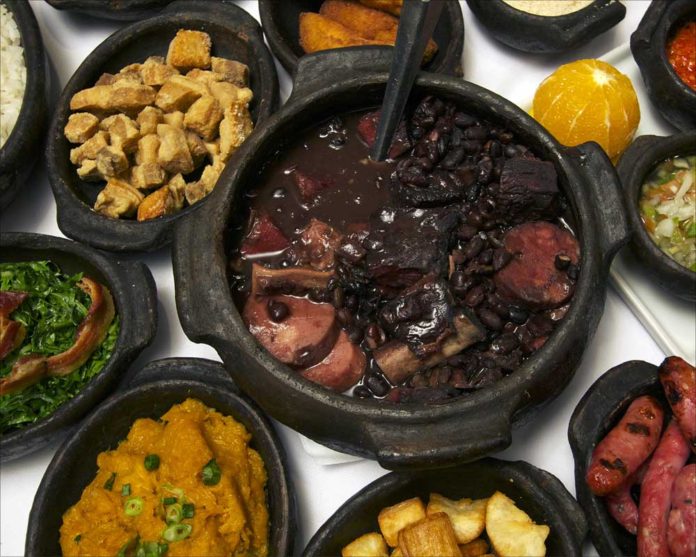 No doubt about it, Feijoada makes for a delicious, flavorful meal. Its combination with the traditional sides makes it a delight for the eyes, too.

Telling Feijoada’s story means stirring the pot with several theories as to its origins, but the fact solidly remains that the weekend, worldwide tradition of cleaning up the leftovers by throwing them in a pot and serving it up with rice and beans is routine… and tasty!

In telling Feijoada’s story, we turn to an expert. Fabia Brisola Paiva of NUBI explains: “There are many theories of how this dish was created. The majority of Brazilians sustain that Feijoada is 100% Brazilian food created by slaves in senzalas – portuguese name for slavers’ quarter. The tale states that slaves were sometimes given parts of pork meat unwanted by the lord of the manor such as tail, noose, and ears and would cook them with black beans in a kind of stew.

“The truth is that from the 16th to 18th century, even the Lord of the Manor wouldn’t have pork meat often and the parts of the pig were considered a delicacy at the time.”

The first time Feijoada figured in a menu was in 1833, in the posh Hôtel Théatre in Recife, North-Eastern Brazil with the name of Brazilian style Feijoada. Probably the traditional sides were included at the time – white rice, cassava coarse flour, spring green and slices of orange.

Whatever its beginnings, and whoever is telling Feijoada’s story, there is no denying that a properly prepared Feijoada will leave you sated, and perhaps in need of a nap! Sounds to us like it’s the perfect idea for a weekend wind down.

You Can Do This: The Perfect Caipirinha